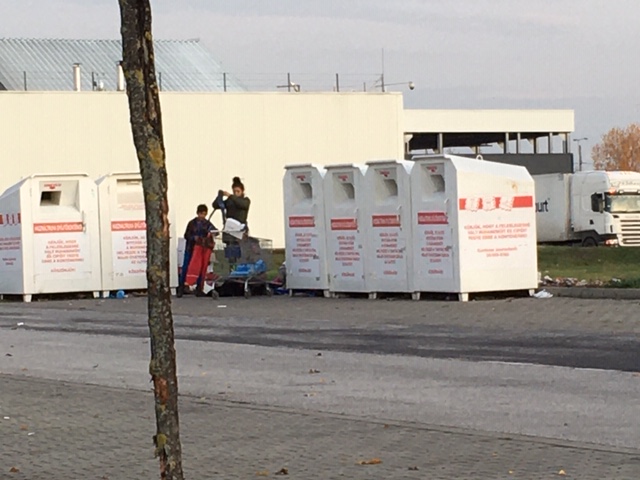 When for some ten lost minutes I park my car in a parking lot, I see from a distance some Roma women looking for something near the shopping carts. They draw my attention; when a car arrives to drop some bags of clothes in the containers, they run at it. After some talking they manage to persuade the woman to give the bags to them instead of putting them into the container.

When she ’s gone, they wave to the other side of the parking lot, and some more people arrive. With in their hand a can of Redbull or a role they had just bought they curiously look for the new stuff that ’s been brought. The bags are emptied to see if there ’s anything after their liking.
It looks like a family outing, and I can’t really put into words what I feel about it. Is this surviving or just a clever way of getting your stuff? I don’t know what to think about it. I think of the struggle we sometimes have if one of us asks himself why we have come here in the first place? Sometimes it seems so hopeless to see how people live and are just stuck in poverty and…

Suddenly a girl runs back to the shopping carts and a baby is being pulled out of a buggy; apparently he woke up.
My ten minutes are over and when I pass by while leaving I catch the glimpse of a girl, about 15 years old. I think of my girls that I will pick up from school in a moment, but here I see a girl near the shopping carts with a sigaret in her mouth, feeding her baby. I send up a prayer for her, and keep thinking about her for quite a while.

After I picked up Christy it has become dark already, and I decide to pass by once more. I ‘m just curious how they left the place there. To my suprise they are still there and I see them clean up what ’s left into the containers. I park the car at some distance and tell Christy what I saw earlier. A little boy of about five years old with the most beautiful brown eyes comes up to us and when I openup the window, he asks me: did you come to bring clothes? When I say ‘no’, he runs away, back to the family outing. To me it seems terrible to have to live like that, but to them every bag that arrives seems to be a party.

I still don’t know what to think of it, and I just leave it be. At least it keeps me thinking, and that makes me pray.