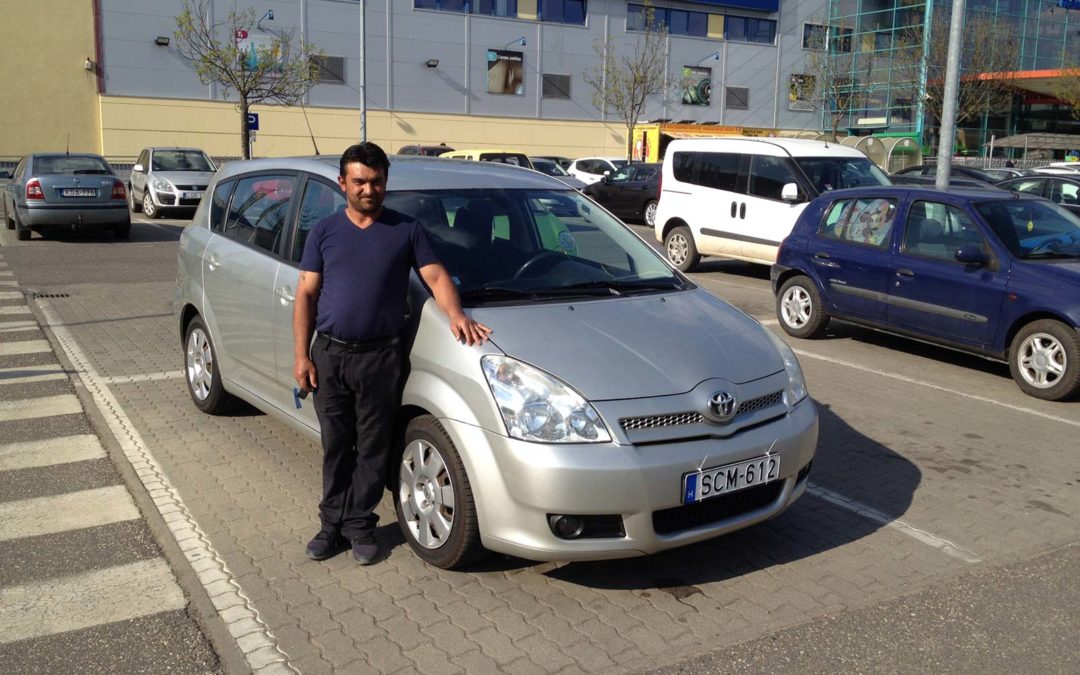 Just before the corona-crisis broke out and the borders were locked, Robi and I managed to get back into Hungary with the car that we had bought for him in Holland.

To him the entire trip to Holland was as if he lived in a movie. He had never traveled by plane before, he had never been abroad before and – I only heard this when we were going to travel back – he had never driven on the highway by himself before… But also experiencing a different culture, the fact that my mother opened up her house for us, was a totally new experience to him.

So we managed to buy him a car and to drive back to Hungary with it. The picture shows Robi with his new car, he ’s very excited about it! Thank you so much to all the people who contributed generously! There even was enough money donated to pay the first maintainance and the mandatory checkup.

The Hungarian license plate did not get on the car that easily though. Getting an appointment for technical checkup took more than a month. After that you need to go from here to there to all official agencies to get the right papers. Next to that a huge amount of money needs to be paid as a sort of import tax. But even still it ’s cheaper than buying a second hand car in Hungary. At one office we needed to get insurance for the car. The guy asked Robi if he had children and what the date of birth of the youngest was (so there would be reduction in the fee). ‘I don’t know’, Robi replied. I ‘m afraid my mouth stood open for a few seconds in amazement: does your child mean so little to you that you don’t know her date of birth?!

When later on I told about this to Prisca, she said: perhaps we should not try to make Roma just like we are. Gradually I started to understand this. Robi and his family, just like many Roma, live from day to day and every day is a struggle to survive. Overseeing longer periods like months or years is simply not in the scope. The fact that he doesn’t know his child’s birthday, does not mean that he doesn’t care about her, but simpy that he lives in a totally different world when it comes to time management.

Having a car however does require that you plan ahead and make budgets. Perhaps Robi might learn something from me in that, just like I learn a lot from him.